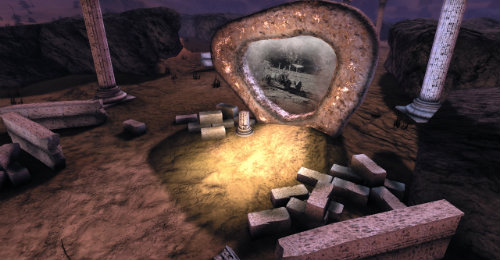 Trapped in the future of an alternate universe, the crew of the USS Katana face an uncertain future of their own. Though the cunning Captain Kristopher N. Kerouac yet again shows that he is not afraid to bend or break rules and regulations, in his universe or any other. They say desperate times call for desperate measures, and a man who has spent his life surviving by cheating death, facing danger, and taking extreme risks, disregarding the laws that bind. Sometimes, it takes embracing one's inner darkness to find the necessary strength and determination.

Wanting to get his crew and starship back home to where they belong, the man who has spent his entire life facing unbeatable odds, scoffing at danger, and taking extreme risks is forced to resort to something that he himself has long since rejected. Knowing the power and potential danger, Kerouac ventures into the science labs of his starship to temporally embrace the Bajoran religion, consulting an Orb, a Tear of the Prophets that the USS Katana had previously found in the Gamma Quadrant planet, Kendi.

Experiencing a sort of visionary encounter with the Pah-Wraith contained in the Orb, Captain Kerouac is shown a way home. However, the price of getting there may result in death of every last moral fiber in the Captain's philosophy. Violating Starfleet's General Order 7, Captain Kristopher N. Kerouac orders helm to lay in a course for the forbidden Talos IV, a planet where no man, no Federation starship Captain should go. Becoming slightly crazed due to prolonged influence of the Pah-Wraith, Kerouac calls a meeting of his Senior Staff to explain his actions, facing the potential of a mutiny looming over his head.

The Guardian of Forever. The device and being, centuries old and a surviving relic of a lost civilization has long since been heavy protected by the United Federation of Planets, the location of the planet long since a secret in the 23rd and 24th centuries. During the Dominion War, the Guardian of Forever was transported from it's native planet and relocated to Talos IV, the Federation's last ditch effort to ensure that it did no fall into enemy hands, and that the misuse of the ancient device would not occur. First discovered by the USS Enterprise under the command of Captain James T. Kirk, the device now rests in the hands of the Talosians, the dangerous telepathic species, experts at mental manipulation through illusions.