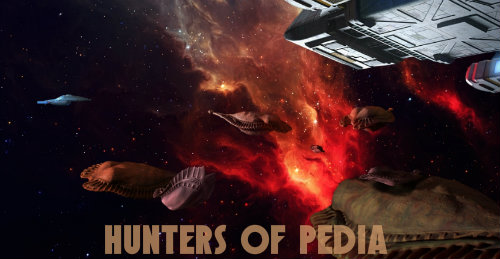 Following the unfortunate incident with the Dominion on and around the planet Kendi, the USS Katana has been significantly damaged and is undergoing repairs round the clock for the past two weeks. Having lost their First Officer and Ship's Counselor during the skirmish with the Jem'hadar, the USS Katana solemnly creeps around at low warp as Engineering teams and Operations personnel continue extensive work on the Engines. Relief personnel and additional crew arrive on transports.

Commander Kerouac and the Senior Staff welcome aboard Lieutenant Commander Cameron Tegan as the new First Officer
following the death of Lieutenant Commander Tul Zanaar. With new orders being issued to the Katana, the repairs are completed and the
starship finds itself with what should be a more relaxing mission. Commander Kerouac and Lieutenant Commander Tegan have been issued interesting orders of a scientific nature. A Federation transport vessel from Starbase Unity reported seeing celestial lifeforms
moving about like a school of fish. Having taken scans of the creatures, theFederation and Starfleet databanks were accessed and a match was found.

Twenty one years ago in the Alpha Omicron system, a Federation starship encountered two of these rather benign
creatures. However, an unfortunate misunderstanding caused the death in one of the creatures, a mother. A Federation
starship learned quite a bit about the life form which has since become known as the Gekli. The Gekli were eventually classified as 'protected species' by the Federation Science Council and Starfleet Science. Katana's orders are simple enough; they are to follow the school of
Gekli and study them, collecting as much information as they can on the creatures. Commander Kristopher Kerouac soon discovers that his starship has a guest, a woman from his past and a brilliant former science officer.

The relaxing scientific mission takes a twist and a few turns with Captain Merith aboard a guest. Whilst following
the school of Gekli, the USS Katana makes several discoveries which complicate their scientific study. A small altercation with the Pedians, a
previously unencountered nomadic species native to the Gamma Quadrant. Kris finds himself relying heavily upon the advice and direction of his former love interest, Captain Merith in regards of what to do about the Pedians and the Gekli. Matters only worsen when a quantum singularities begin to open up and additional 'guests' show up the table.